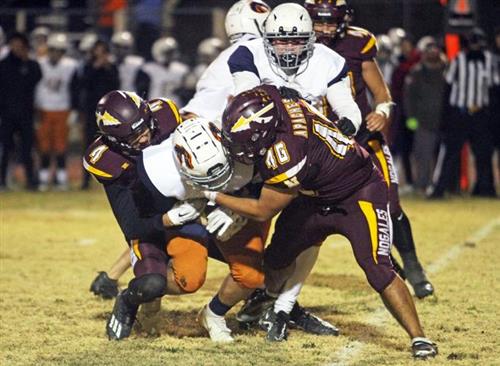 On a chilly Thursday night, the Nogales Apaches capped off a hard fought season with an emphatic 42-21 win over the Cholla Chargers.

After starting the campaign 0-6, including a season-opening loss to local rival Rio Rico, the Apaches ended their season on a 3-1 run with victories over Flowing Wells, Rincon and Cholla. That run allowed them to finish with a winning 3-2 record in the 5A Sonoran Region.

"It was a great feeling to be able to put up 42 points after such a tough season," senior running back Benjamin Ley said after Thursday's finale. "Especially after starting 0-6 and having people tell us we were going to go 0-10, it was amazing to be able to fight back and get to 3-7."

Thursday's game got off to a rough start for Nogales, as what appeared to be a fumble recovery by the Apaches was given back to Cholla. The Chargers subsequently went to their bread and butter play, in which running back Malachi Eafon took the snap and took off running, scoring the game’s first touchdown.

The Apaches were unable to get anything going on their next offensive drive, but that's when their defense stepped up. Defensive back Gustavo Arellano intercepted a Cholla pass, giving a spark to the Tribe.

Unfortunately for the Apaches, they turned the ball back over on a fumble. But their defense returned for another stand.

This time, the Nogales offense was able to drive the ball down the field and punch it in on a hand-off to senior fullback Nicolas Gonzalez. After a missed extra-point attempt by NHS, the score at the end of the first quarter was 7-6 in favor of Cholla.

In the second quarter, the Nogales defense turned the tide of the game with an impressive goal line stand. The Chargers pushed deep into Apache territory, but had to settle for a field goal attempt on fourth-and-goal. However, a NHS defender broke through and blocked the kick, sending the ball ricocheting high in the air. Arturo Alvarez caught it and ran it the length of the field, giving the Apaches their first lead of the game and energizing the Nogales faithful.

After Ley punched in the two-point conversion making the score 14-7, the Apaches never looked back.

With momentum on their side, NHS took a gamble on the ensuing kickoff and hit the jackpot by recovering an onside kick. Keeping their foot on the gas, the Apaches once again took off down the field, though this time they would score through the air as opposed to their usual run game. Tight end Baltazar Pacheco caught a pass from sophomore quarterback David Farias, giving Nogales a 21-7 lead at the half. 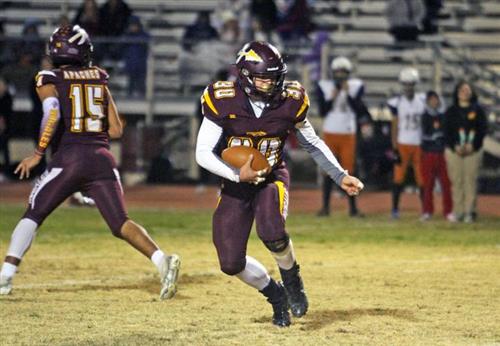 The Apaches came out of the break swinging and added to their lead. This time it was senior quarterback Adrian Lopez Olaiz who slung a touchdown pass to Pacheco, putting NHS up 28-7.

Cholla came back to score near the end of the third quarter, bringing them to within two touchdowns at 28-14. But starting the fourth quarter, the Apaches slammed the door shut on any viable comeback.

NHS special teams made a fantastic play to start the final 12 minutes when defensive end Gabriel Pinto blocked a Chargers punt and the Apaches recovered the ball deep in the red zone. That’s when Ley hammered in another Nogales touchdown to put the home team up 35-14. Ley scored again later in the quarter to give him two rushing touchdowns in the game, along with the converted extra point.

The Apaches finished the game by forcing another Cholla fumble and then running out the clock to end their season on a high note.

"There were a lot of ups and downs, but it feels really good to go out like this," Lopez Olaiz said after the game. "At the end of the day, we are a family and that’s all that matters.”

With his high school football career now over, Lopez Olaiz said he would look back fondly on his first touchdown with the JV team, and on leading three touchdown drives on Thursday against Cholla.

Senior lineman Esteban Acavedo said for him, “it was all about the pancakes. It's the number one thing about being a lineman: getting all the blocks.”

But he also reflected on the brotherhood the players forged on and off the field. "Hanging out with the team before games on the bus, and going to eat after games, that’s amazing, I love it,” Acevedo said.

Ley expressed a similar sentiment, saying: "People don’t really think about what happens after the games, but it’s really special to be able to have a really good time with everyone. It’s gonna be really rough for me to leave and not be with these guys next year.” 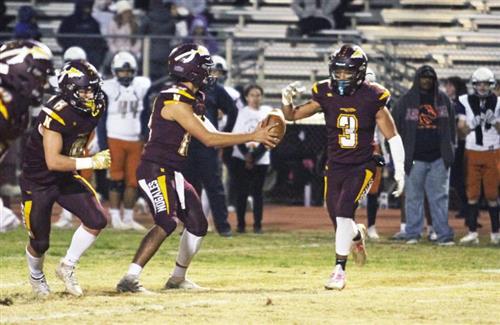